Museums can be fun when you go to see something your kids are interested in.

A couple of weeks ago when I asked my kids if we should go to the museum, my 5 year old daughter was very excited, and she said she had always wanted to go (which was the first time I’d heard her say, but any way… that’s kids for you! ).  My 3 year old son was not so thrilled and watching his sister’s excitement intently not quite sure whether to copy her or not but as we spoke to him more about the things he might see at the museum such as lions, dinosaurs and bones he progressively got exited.  I knew he might get a bit bored at his age especially being a typical boy looking at things without having to run around can bore him quickly, so I was sure to make a mental note to take the stroller with me.

So we wanted to go to the Melbourne Museum which is on Nicholson Street on the city fringe.  Now if you are driving there is 4hour parking on the Nicholson Street ($3.70 per hour) Or Museum underground parking ($20 for 2 hours+ check their rates for current pricing).  Callum my 3 year old, kept on asking if he will see animals, and I explained to him the animals we see at the museum are not alive, the live ones are only at the Zoo.  But it was puzzling him how can he see animals that won’t move.  So this was an interesting concept for him and was looking forward to finding out the answers to all his questions once he gets there.

We chose to go on a Wednesday around 11.30am so it was nice and quiet for us and plenty of parking on the road.  A packed lunch only consisting with fruits and almonds (the whole packet of almonds were consumed by Callum:)).  Entry for kids under 12 were free, adults had to pay $12 each.  As we approached the ticketing area of the Museum, as soon as you entered through the sliding glass doors, we were greeted with a scene created from under the sea using real stuffed penguins and other sea creatures.  This was when both kids got very excited.

This undersea scene captured kids’ attention and helped them get a bit of a feel of whats in store inside the museum.  My daughter Anisha (5) pointed out how the school of little fish had formed a large shape of a fish, and that amazed me how she could see that (something even I didn’t pick up on).   Museums are a great place to discover and educate our children about many things.   For me I found it put me in that zone where you are ready to learn and the place felt like a large open book with pictures and real specimens you just walked through it reading and talking about things more in detail.

So once we got the tickets, we entered the animal section of the museum, which showcased a massive skeleton of a blue whale, a dinosaur walk, a under water walk and plenty of stuffed animals and insects from all parts of the world for us to wow at.  We got to know a lot of new facts about animals.  There were also a lot of “staring” at and taking things in moments with Callum especially when he saw a big stuffed Polar Bear and a Panda.  There was enough to see and do  we ended up spending more than 2 hours in this part section alone.

So after the animals we had a little break at the Kid’s Zone where there were lots of fun activities for kids to do including a puppet theater, while parents could get a bit of a rest sitting down watching the kids play.  Then we enjoyed our fruity and nutty lunch at the end of a walk in the Museum forest.  After that we felt we were ready to leave the museum for the day, it was a lot of walking and taking in a lot of information for one day.  This time around we didn’t get to explore the other sections of the museum which covered the First People and Human Mind and Body.   Which means we have to go another time to cover these other sections and spend more time at the Kid’s Zone (as requested by my kids).

It really is wonderful to watch your children learn new and exciting things.  What a great day out it turned out to be.

I would love for you to share this: Sharing is Caring!

This site uses Akismet to reduce spam. Learn how your comment data is processed. 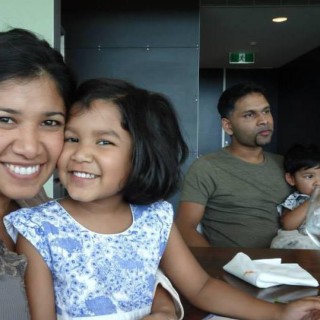 I am a mother, business owner, traveller, adventure seeker, people pleaser, wanna be greeny, Handywoman, Engineer, truth finder, fighter against poverty all rolled into one. Yes my mind can be pretty tiring sometimes when more than one of these above mentioned roles are at work in my head. Which is most of the time. Life is busy, but at the end of the day we are responsible for the way we live our lives. Everything comes down to choices we make. So I plan to make some changes in order to live the way we really feel "right" in our hearts. That is my goal for my family....